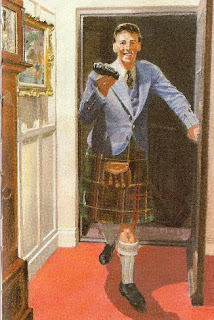 I’ve just put together a new page in the ‘Artists’ section on the illustrator Frank Hampson. Frank was one of the small group of artists who, after war time service, worked for The Eagle comic before moving to Ladybird in the 1960s.

But before working on this page, I hadn’t realised how instrumental Hampson had been in the very creation of The Eagle and how central a role it played in his life as an artist. Hampson is best known for Dan Dare – the character he created from the very birth of The Eagle. By comparison, Hampson’s work for Ladybird was less all-consuming – perhaps a way to pay the bills when he felt forced to leave The Eagle. But the artistic freedom he had enjoyed producing comic-strips led him to take a very unusual approach to some of the more ‘mundane’ topics he illustrated for Ladybird. He often illustrated scenes from a very unexpected perspective – giving his books a rather surreal appeal.

The most creative Ladybird commission he got was to illustrate the three 1960s Nursery Rhymes books. Hampson’s unconventional approach either appealled strongly to children – or rather scared them. I was in the latter camp, personally – but lots of people seem to recall these books with great affection and they are getting harder and harder to find now.