So what’s the story? The kitchen table 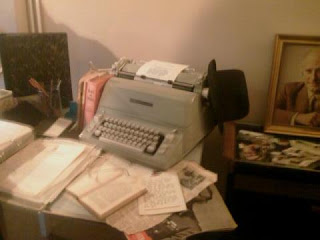 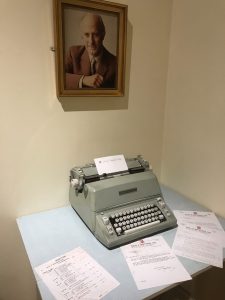 The kitchen table, as displayed at a recent exhibition

It’s plain and simple and with a formica top.  Some of us will remember tables like this in the house of relatives – or perhaps have one lurking somewhere in our own.

So what’s it doing on a website dedicated to old Ladybird books?

Once upon a time, this table stood in the kitchen of the house in Douglas Keen’s house in Stratford on Avon.  When, in the 1950s, he began to be successful in his career at Wills & Hepworth he did what he had always wanted to do:  he built his own house and furnished it in a modern style. 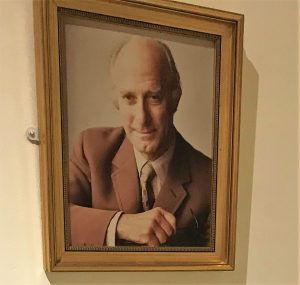 There was to be no heavy Edwardiana, chintz and panelling.  He wanted the cutting edge of 1950s design: sleek and simple.  Chipboard, plywood and formica – new materials, new styles and the best that his wallet could supply.

House and home were important to him and, living in Stratford, he did not want to commute the the Wills& Hepworth factory in Loughborough every day.  Once his position at the company was secured, he chose wherever possible to work from home and, as his star rose within the the company, was granted more and more licence to do so.  As the Commissioning Editor for Ladybird, Keen would come up with ideas for new books, source the best writers and artists for the brief, discuss approaches, review the artwork and essentially take responsibility for the creative side of all production. 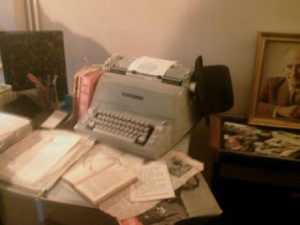 The table in the Keen’s Stratford-on-Avon house

On the table you can also see Keen’s actual typewriter – a Hermes, nothing but the best and most up-to-date, and in the typewriter is a piece of official Ladybird letterhead. 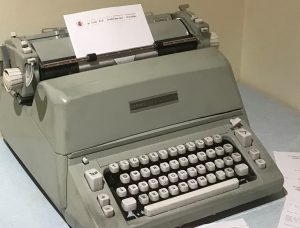 He was given permission to use his home address in Stratford on the letterhead.Wherever possible, editorial meetings were held at his home.  His wife Margaret would produce an excellent lunch and then writers and artists would sit around this very table, discussing the process.  Afterwards they would usually go to the pub.  Remember, this is the period when Ladybird had established itself as a household name and was near the peak of its success, with vast sales numbers both nationally and internationally.

Just a table – and a different corporate world.