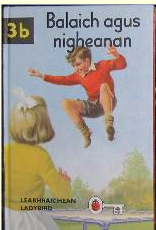 Strangely enough, this week I’ve had two separate questions emailed to me about the Key Word Reader series in Gaelic. The first writer concerned reading schemes in general and asked:

“Janet and John were very English children; they
spoke very proper English, which is fine for teaching English language.
However, the language and the culture are so closely linked that the culture
also ended up being taught. Were there, or are there now any early readers
of this sort for Scottish children, set in Scotland and using the Scots
language, or at least English in a Scots setting?“

‘The reality of the prose of Peter and Jane or Janet and John is that (apart from being the almost inevitable consequence of trying to build dialogue using – initially – on 12 key words) it is tied up with 1950s/60s notions of education and class – but not really of geography. The fact is that the childhood depiction of these children would have had much more in common with a privately educated middle-class child in Edinburgh than with a working class English child in Bradford or Portsmouth. The ‘culture’ represented is not Scottish, Welsh or English – but some 1950s concept of what, as you say, was considered ‘proper’. Indeed it might suprise you to know that Janet and John who you call “very English children” are in fact American! The books were copyrighted from 1940s American books and simply reprinted in this country’.

Peter and Jane, on the other hand, were ‘English’, but you only have to read the article by the very English Libby Purves to see how ‘posh’ reading-scheme children inhabiting their rosy, idealised suburban worlds push all sorts of people’s buttons – you certainly don’t need to be Scottish to resent them!

Then of course it’s easy to measure the Peter and Jane books with a contemporary yardstick (a metre stick?)and to forget their real context. To repeat an excellent observation made by journalist Cressida Connoly, in their time Peter and Jane were actually …

“…an antidote to the privileged country children of popular literature, such as Swallows and Amazons or the Famous Five. Ladybird children didn’t go to boarding school; they went to the local newsagent’s on their bicycles. The childhood of Ladybirds was egalitarian and unsnobbish, depicting suburbia as the kind of utopia that town planners always intended it to be.”

In an interview shortly before his death, artist Harry Wingfield, speaking of the criticism of the Key Word reading scheme said:

“no kids want to be dustbin kids, you can’t illustrate the dustbin kids all the time….I was illustrating what the average council family would like to be regarded as they were, but of course you can’t illustrate disadvantaged kids all the time, it’s not what your business is doing… you’ve got to sell to the parent, you’re not selling to the five year old or the three year old, you’re selling to the parent or the grandparent, who’s trying to please these children or teach them and that’s the recognised way of doing things. But you’ve got to make them nice to look at”.

The second email question I received was a simple request for more information about Peter and Jane in Gaelic – and I wasn’t able to be much help. I have a complete set of the Key Word series in Welsh (24 books – I don’t think any ‘c’ books were published) and quite a few swaps. But I have only two books in Gaelic, so I don’t think they can have been in print for long.

Besides, it seems to me to be a rather odd thing to do, to devise a whole reading scheme based on meticulous study of the ‘key words’ used of one particular language – and then to translate it into another completely different language! I wonder how comfortable William Murray was with this?