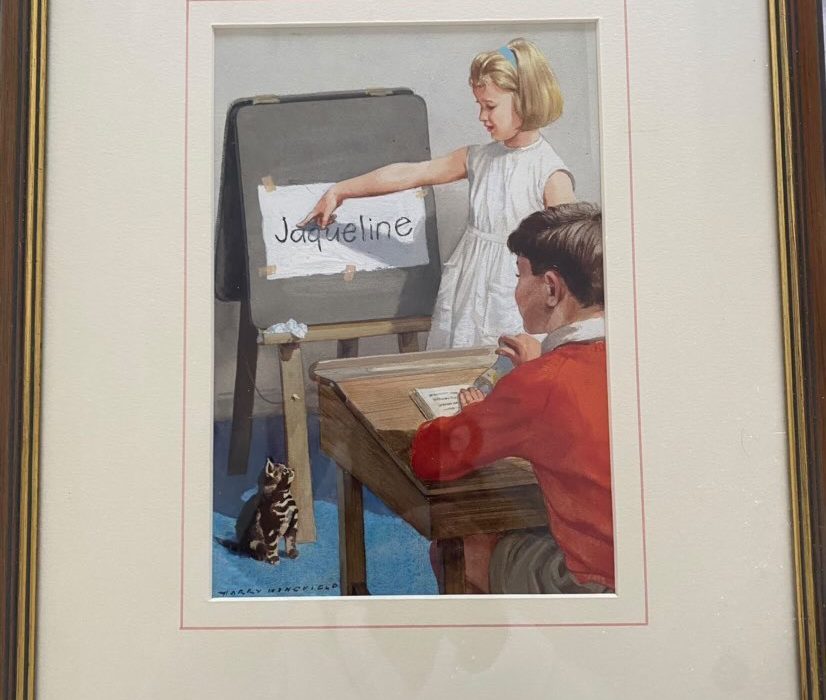 Jane – fictional heroine of the Peter and Jane reading scheme books – was my role model, growing up. In some ways we had a great deal in common: we were both born in the mid-1960s, we both had one older brother. We both lived in an old, terraced house on the edge of a big town and went to the local state school.

In other ways, though, we were very different. Jane was about 6 years old when she was ‘born’, whereas my approach was more conventional. She always wore a spotless white frock and had a hair bow that stayed in her neat, blond hair. I wore hand-made clothes and a hairband that only seemed to make my scruffy brown hair stick up. My brother and I fought like cat and dog; Peter and Jane were the very definition of sibling harmony.

But it was the glowing perfection of her childhood that made the biggest impression. I wasn’t envious of her because she wasn’t real and I wasn’t stupid, but I aspired to a life, to poise, to a hairbow like hers.

The years rolled by and I grew up and forgot about the books and then rediscovered them. I began to piece together the story of Ladybird books: of the artists, the writers, the models and the process. I learnt that the Key Words to Reading scheme (the Peter and Jane books) were a phenomenal success – they sold literally millions of books and, at one time, were the main reading scheme nationally – used in at least a third of all schools in the country.

Now, the two main artists for the original Peter and Jane series were Harry Wingfield and Martin Aitchison. They used various children as models over the years as reference material for the illustrations. Harry and Martin didn’t live anywhere near each other, but as long as they made sure that their final illustrations looked similar, it didn’t matter if the models were different. I was lucky enough to get to know Martin Aitchison in the last 20 years of his life. Through him I also met the two children (brother and sister) who Aitchison used as models for almost all his 1960s original illustrations. Jean and Andrew turned out to be just as warm and friendly as you would want ‘Peter and Jane’ to be.

But that still left a big question unanswered. Who was the very first Jane? Which little girl formed the blueprint for all the illustrations that were to follow? The very first books (1a to 1c) of the Peter and Jane books were illustrated by Harry Wingfield. I knew that his model for Jane must have had fair hair because Martin Aitchison had to adapt his model to match: Jean (Atichison’s model) had brown hair which had to be changed in his pictures. But no reliable information ever came out about who the first little girl was. Every now and then, the press would carry a story about finding ‘the real Jane’ – but the girl pictured in the newsaper was clearly not the right one.

Then one day, out of the blue, I received a private message on social media and I finally got to speak to ‘Jane’. The original one – with photographic evidence to put the case beyond contention. And yes, she (real name Jackie) really did have angelic features, tidy blond hair and a hair ribbon that stayed in place – at least, she did when she was 8 years old. Judging just from Jackie’s profile picture (her account is private) she is still a very glamorous lady with all of her childhood poise.

Jackie S. is a very private person. She gave me permission to share the story, but had no wish for any publicity. We swapped messages for quite some time and this is what she told me.

Growing up, Jackie and her family lived just down the road from Harry (“or Mr Wingfield, as I called him”) near Walsall. The family ran a little shop on the corner of the main Chester Road and Aldridge Road. Ethel, Harry’s wife, may have asked Jackie’s mum if it would be OK to take photos and this was agreed. Jackie was about 8 at this time – older than the fictional ‘Jane, which may have added to her air of sophistication. She recalls Wingfield asking her to pose in the garden with her toys, going on the bus and sometimes to the few shops in the village .

But what of her fictional brother, Peter?

Well, Jackie did have a brother but he was a few years younger than her and so unsuitable as a model for Peter. As a result, Jackie never got to actually meet ‘her Peter’; the reference material was collected separately and boy and girl only ever came together in the completed illustrations. According to Jackie, Harry would ask her little brother to get into the positions of Pat the dog so he could work out the composition. Jackie’s poor brother was often teased about this: while Jackie played such a starring role in the final books, her little brother’s closest claim to Ladybird fame was having been a stand-in for the ficitional pet dog. As far as Jackie knew, she was the only family member to appear in the illustrations.

In addition to the reference photos that Harry set up and took himself, Jackie’s Mum also let him use some holiday snaps from a recent trip to the seaside. When Jackie showed me a couple of these photos, it dawned on me that actually I could right a long-standing injustice.

In the 1970s, Harry was asked to revise his illustrations of Peter and Jane to bring the 1960s characters more into the groovy new decade. On the first page of this first revised book there are a couple of small illustrations of the brother and sister. It’s pretty clear that Harry used the beach holiday snap for this illustration. So little brother did make it into the book as Peter afterall. I’m pleased he can now finally be at peace with this episode of his life.

What’s more, it’s also clear that Jackie needs to share some of her fame with her real-life father, who can be spotted in another illustration from the series.

Even before the extraordinary success of the Key Words reading scheme (Peter and Jane books) Ladybird was established as a household name so I asked Jackie if she was proud of her role – and what her friends thought.

“My friends knew of the modelling” she replied, “and it wasn’t a big deal until my teachers found out and to be fair I was quite embarrassed. The embarrassment only got worse in secondary school, I really don’t know why but I guess I didn’t like being in the spotlight as such, a teenage thing.
My family were very proud though.”

Years later, Harry Wingfield had an exhibition of his original artwork for Ladybird at the Driffold Gallery and made a present of one of the pieces to Jackie. The scene in question showed her playing at being a teacher, in front of a blackboard. In the final illustration, the word ‘Danger’ is written on the board, but for production purposes, the artwork was produced with a blank board. Before giving Jackie the original artwork, Harry kindly painted Jackie’s name on to the board as a personal touch.

Jackie treasures the artwork, and never mentioned to Harry that he’d actually spelt her name wrong. Harry died a few weeks later, in 1992.

If you go to my exhibition you will see on show this piece of original arwork (below) and you now know that it was modelled by Jackie.

And so the mystery of Jane has finally been resolved. But that just leaves one last teeny tiny question; who is this boy? Who was the original Peter?