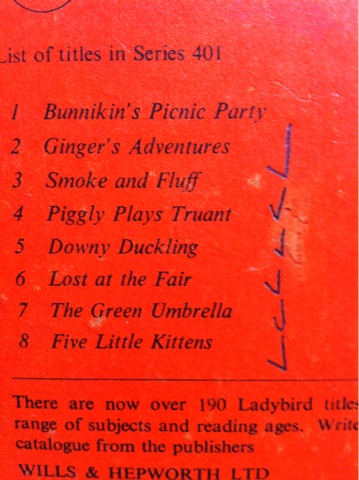 How often does the back cover of a Ladybird Book show that it has been as a tick list by a young owner, at some time in its life?

Book vandalism, of course. But then the Ladybird Book collector should be one of the first to admit to enjoying the pleasure of ticking off the books so far acquired in a given series. I’ve always thought that, because the books come in series, the need to ‘complete a set’ is the way most of us get sucked into hard core Ladybird collecting! (Hmmm. ‘Hard core Ladybird collecting’ … has that combination of words ever before been used in the English language?)

So if you set yourself the task of collecting all or some series, how do you know which books you need? The list of titles on a DJ flap or the back of a Ladybird Book are a helpful pointer, but they often don’t tell the whole story. Of course they don’t tell you the books that were published after that title, about books that have multiple editions – and about titles that were no longer in print at that point – so you won’t find a Nature series book published after then 1970s that mentions the first 3 books in that series (British Birds and their Nests) etc.

Once upon a time there was a fairly definitive list on Nick Robinson’s Easy-On-The-Eye site. But that sadly seems no longer to be there. Nicole’s list of all Ladybird Books is almost too comprehensive to be used as a check-list. The lists on my Bookshop pages are fairly comprehensive but aren’t suitable to be printed out and shoved in your bag for the next time you visit a charity shop or car boot sale.

What I’d like to offer on my website is an easy-to-print definitive list of books between 1940 and, let’s say, 1985. I’d also like to make it so that it would have ‘tick boxes’ that it could be selected/de-selected from a smartphone.

But can anyone help me get started? Has anyone got on Word or Excel a fairly comprehensive listing in chronological order that I could then adapt? If you have, and don’t mind sharing, then please let me know.